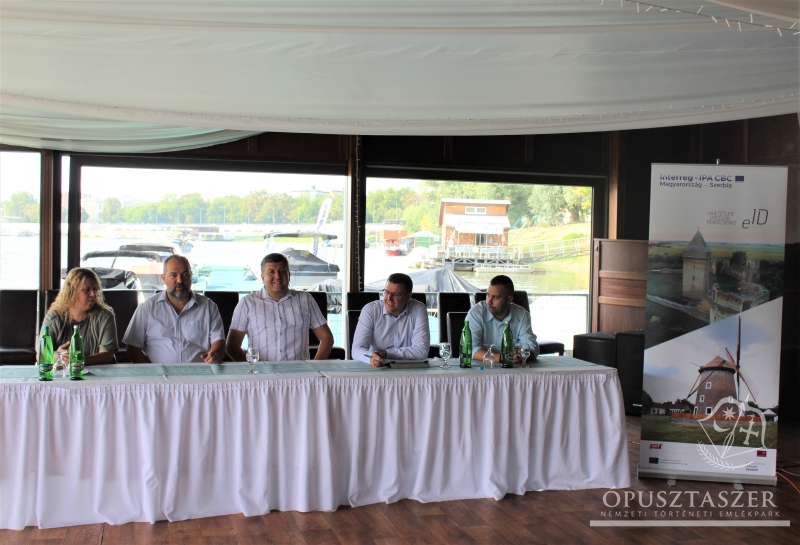 In accordance with the style, nurtured by the EXIT Foundation and the National Heritage Park from Ópusztaszer ÓNTE, an introductory event of the new joint project of the two organizations was held on Thursday, 16 September, on a raft on the Tisza River. The role of Tisza is of special importance, because it does what the goals of the project suggest – it connects both regions.

Last year, the Ópusztaszer National Heritage Park ÓNTE and the EXIT Foundation completed a successful cooperation last year, where they were partners of the project, which was realised through the same grant programme. The new cooperation is also in line with the already started joint agreement, that is – by realising the concept of building a “Modern and traditional cultural and tourist route”. Like the previous one, this project aims to strengthen the cooperation of tourist organisations in the region, and provides an opportunity for the citizens of Serbia and Hungary to participate in professional tours and exchange their opinions from various fields of expertise.

At the beginning of the event, Péter Kertész, Executive Director of the Ópusztaszer National Heritage National Park ÓNTE and Ivan Petrović, President of the Board of the EXIT Foundation, greeted the audience, emphasizing the importance of this cooperation.

The goal of the project “Incredible Destination Events” is to create an innovative platform, which will popularize certain cultural destinations among young people, thus motivating them to visit prominent cultural and historical monuments of our neighbouring countries. During the realization of the project in the popularization of the National Heritage Park Ópusztaszer ÓNTE and the Fortress in Bač, prominent music stars, performers and orchestras will participate, taking part in video materials recorded at these beautiful locations. Video recordings of the locations, with the participation of music guests, will be broadcast on the Internet, through shared digital communication channels, where they will be available to millions of viewers around the world. After the completed recording at the Bačka Fortress, it was announced at the conference that a big music festival will be organized in the heritage park next year.

The Interreg-IPA Cross-border Cooperation Programme Hungary-Serbia is implemented within the 2014-2020 European Union financial framework, under the Instrument for Pre-accession Assistance (IPA). On the basis of “shared management system” of the participating countries –  Hungary and Serbia, the Programme funds and supports co-operation projects of organizations based in the Programme-eligible area – Hungarian counties Csongrád and Bács-Kiskun, and Serbian territories: West Bačka, North Bačka, South Bačka, North Banat, Central Banat, South Banat and Srem district. The Programme helps the development of a stable and co-operating region and the overall quality of life in the border region. It enables economic collaboration of organizations from the two countries, nurtures the common identity, and cultural and historical heritage of the border region, and contributes to its environmental sustainability and safety. For more information, please visit: www.interreg-ipa-husrb.com.