Početna » News » HEMI Panel at No Sleep Conference: “The Art of Building an Artist’s Career” 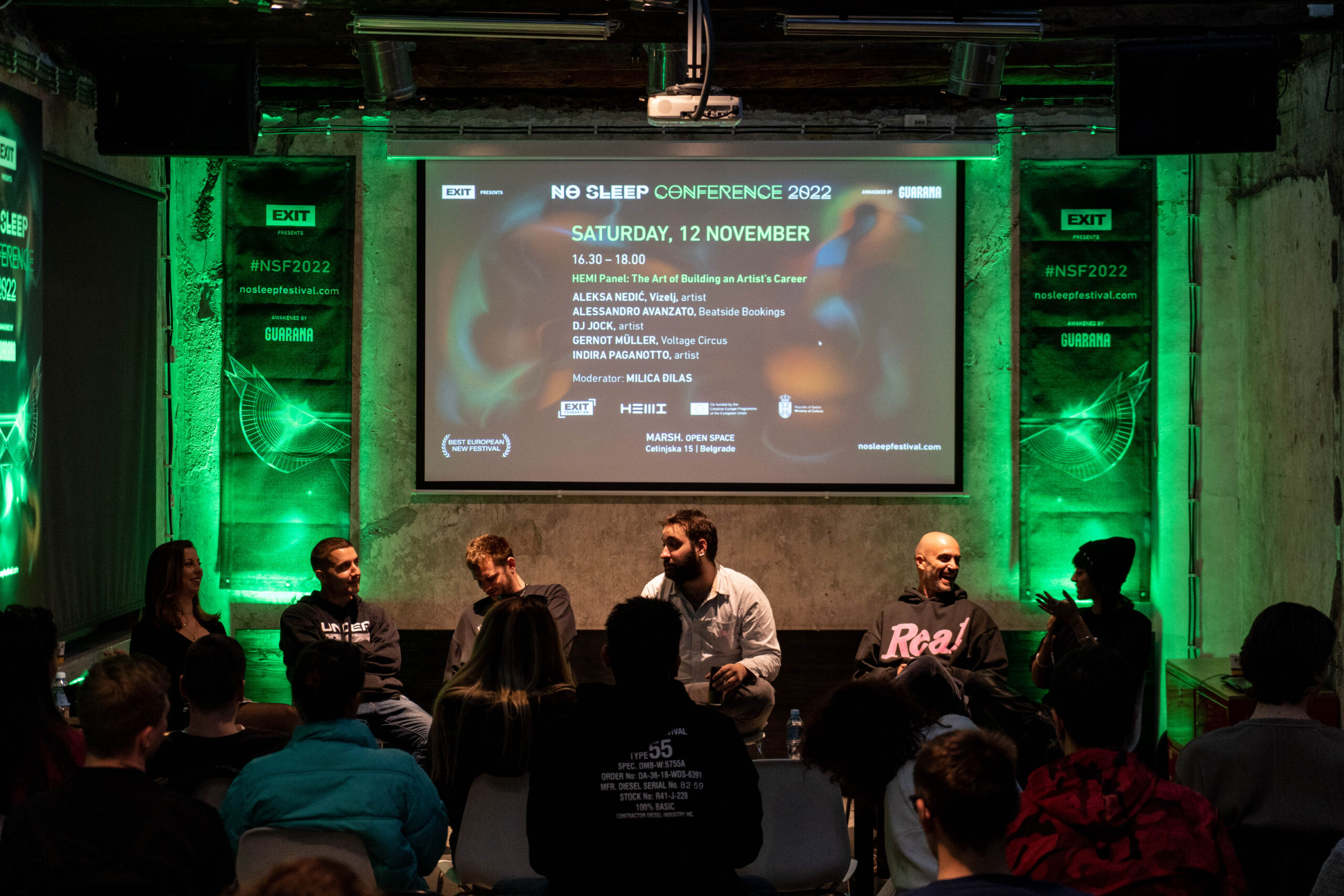 As part of the No Sleep Festival and Conference, a HEMI panel entitled “The Art of Building an Artist’s Career” was held on Saturday, 12 November.

The HEMI project was supported by the Creative Europe programme, and the relevant names in the music industry gave useful advice to musicians, from building a music portfolio and building a community on social networks, to gathering a solid base of loyal fans.

Aleksa Nedić, frontman of the Belgrade band Vizelj and semi-finalist for representing Serbia at this year’s HEMI Music Awards, producer and DJ Indira Paganotto, her manager and agent Alessandro Avanzato from the Beatside Bookings agency, DJ Jock and the founder and director of the marketing agency Voltage Circus, Gernot Müller, shared their experiences.

Aleksa Nedić, on behalf of the alternative band Vizelj, shared the band’s motives for applying for Hemi Music Awards, as well as the experience that participation in this project brought them: “We applied for the HEMI Music Awards just to see what would happen – we didn’t know what it was or how big it was, but it all seemed very cool. My band performed at EXIT Festival as part of the HEMI Showcase, which is probably the dream of everyone who has a band in Serbia – to get a chance to play at EXIT. It was a great experience and I’m glad that we have EXIT Festival and HEMI nomination in our portfolio” – explained Aleksa and invited young alternative bands to apply for the competition for the HEMI Music Awards in 2023.

Alessandro Avanzato, manager and agent of the Beatside Bookings Agency, who represents Indira Paganotto, highlighted the most important elements for building a career and gave useful tips for anyone who wants to be involved in music: “There are many elements that have to come together, but the bottom line is the music, attitude, vision and career commitment. I think the most important thing for musicians is to follow their sound, their identity and expression, to believe in themselves and not let anyone tell them what to do with their music. It is our duty to recognise where each of them currently is at, and where we can take them.”

Gernot Müller, founder and director of the marketing agency Voltage Circus, under whose auspices are the Amnesia Club in Ibiza, Magdalena, Rodriguez Jr., Gary Beck and many other performers, emphasized the importance of presentation on social networks and the connection of musicians with their communities: “Imagine that you go on a date and the person across from you doesn’t say anything, doesn’t show interest in anything. You can’t really make a connection and in most cases, you won’t want to go on a second date. I see social media as a space to “date” fans – you have to be interesting. It is very important that, apart from music, you go a little deeper, tell a story, talk about yourself, what you like or don’t like. In this way, you will achieve a sincere connection with the fans”.

The City of Split-based producer and DJ Jock, after the previously held music production workshop, advised the audience that, in addition to creating music, they should not be afraid to share it and seek support: “Create music and send it to others, that will take you even further. Everyone needs support and a ‘push’ in life. You can be the best producer in the world, and make great music, but the contacts are also very important so that someone can actually hear it.”

The same position was also taken by the producer and DJ Indira Paganotto, who, among other things, shared her experience about creating her own label and building a strong base of fans, or “warriors”, as she calls them. Agent and manager Alessandro Avanzato cited her career as a perfect example and inspiration for anyone who wants to be involved in music – her being a producer with a decade of experience, whose work has only been recognised globally in the last year. He once again emphasized the most important factor for the success of artists, whatever genre they are involved in – “Always believe in your product, in who you are and the sound you create. Everything else will come with time.”

The Hub for the Exchange of Music Innovation – HEMI

The Hub for the Exchange of Music Innovation (HEMI) is an initiative of 10 music organisations from Central and South-eastern Europe (CSEE), co-funded by the Creative Europe Programme of the European Union. The goal of this initiative is to develop innovative business models, co-production, and co-promotion of new events/products, create an incubator for music professionals and support performers to meet current market needs.

Find out more at: www.hemimusichub.eu