Open Call for World Music Performers Within the MOST Project 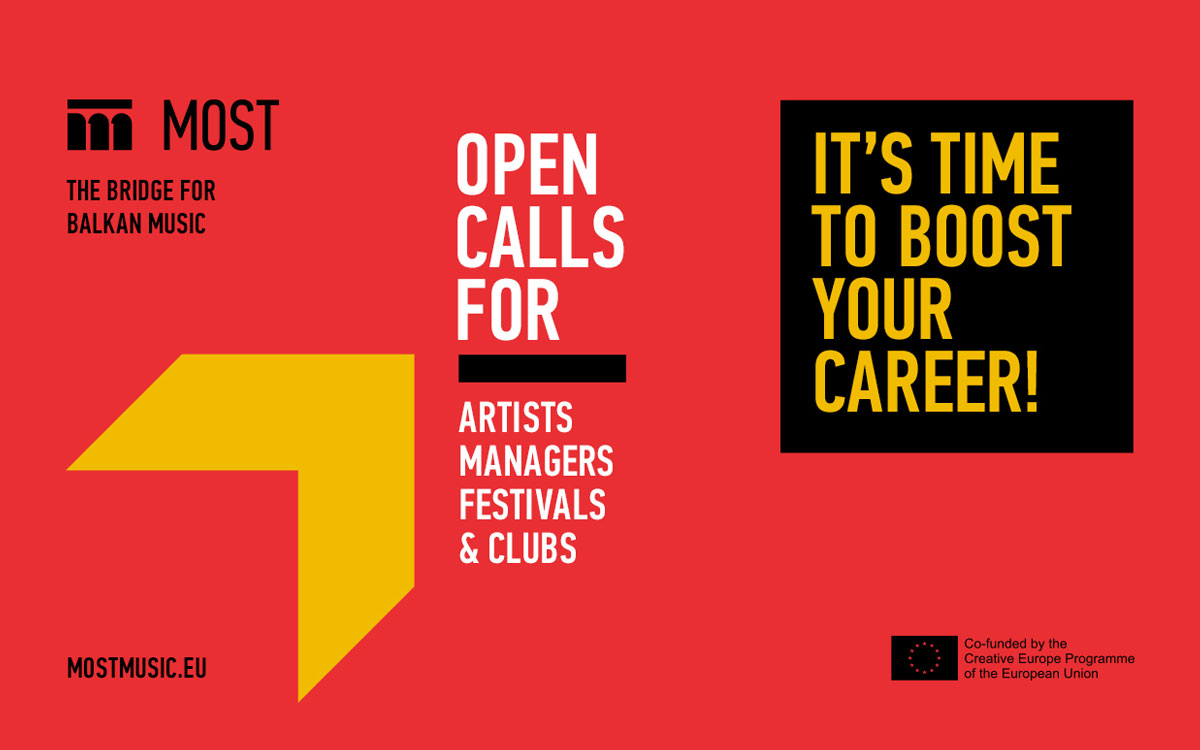 EXIT Foundation invites all performers of World Music subgenres (including traditional, folk, ethno, ethno-jazz, global beats, conscious music, spiritual music and beyond) to apply for the second open call within the large international project MOST, the Bridge for Balkan Music, which has a goal of developing the music industry in the Balkans and promoting local performers on the global market.

The open call is intended for musicians from Albania, Bosnia and Herzegovina, Bulgaria, Montenegro, Croatia, Romania, North Macedonia and Serbia. The deadline for applications is 12th December 2021, and the selected 12 musicians will get greater visibility on the global music scene, financial support, and various career advancement opportunities.

Aside from performing on the stages of major European festivals, such as EXIT and Budapest Ritmo and participating in the prestigious World Music conference WOMEX, the musicians will receive a one-year mentorship program with eminent European music professionals, as well as five days of band management and portfolio creation training. Financial support for the creation of new projects, international performances, i.e. participation in various showcase events, and opportunities to meet music professionals and artists from Western Europe and the Balkans are also planned.

Some of the criteria that will be crucial in selecting new music stars from the Balkans include their international artistic potential, the diversity of music styles and genres, the artists’ popularity, and their performance’s artistic value.

The chosen musicians will have the opportunity to perform at the EXIT festival in 2022 as part of a showcase. Next summer, this festival will host a special event in Novi Sad, dedicated to the City’s title of European Capital of Culture 2022, the MOST project and Balkan music. Also, a conference will take place during EXIT, which will host over 100 delegates from countries across Europe.

In addition to the EXIT Foundation, partners in this four-year project include organisations from seven European countries, led by Hangvető from Hungary.

“The Balkans have various World Music artists representing a high quality, but they fail to reach the international stages due to the missing funding programmes, international relations and supportive music infrastructure and competencies,” says András Lelkes, Founder and CEO of Hangvető, the leader of the MOST consortium and organizer of the Budapest Ritmo, World Music Festival.

The MOST project is funded by the Creative Europe programme, part of the European Union’s framework for support for culture and the audio-visual sector.

The open call for musicians is one of a total of three open calls launched within the MOST project. Open calls have also been announced for young music professionals (training and mentorships under the auspices of European organisations dealing with the World Music genre, such as Piranha Arts and Hangvető) and other professionals from the music industry, festivals and clubs from the Balkans (partnerships with other Balkan and European festivals, financial support and exchange of performers).

MOST brings together important contributors to the music industry of the region. It connects eight countries through four different open calls (for performers, festival organisers, music professionals, and urban creatives). All of the countries share a common goal — to present the Balkans as a fertile and creative musical ground and strengthen the music market of the area through support for contributors to the World Music and ethno genre.