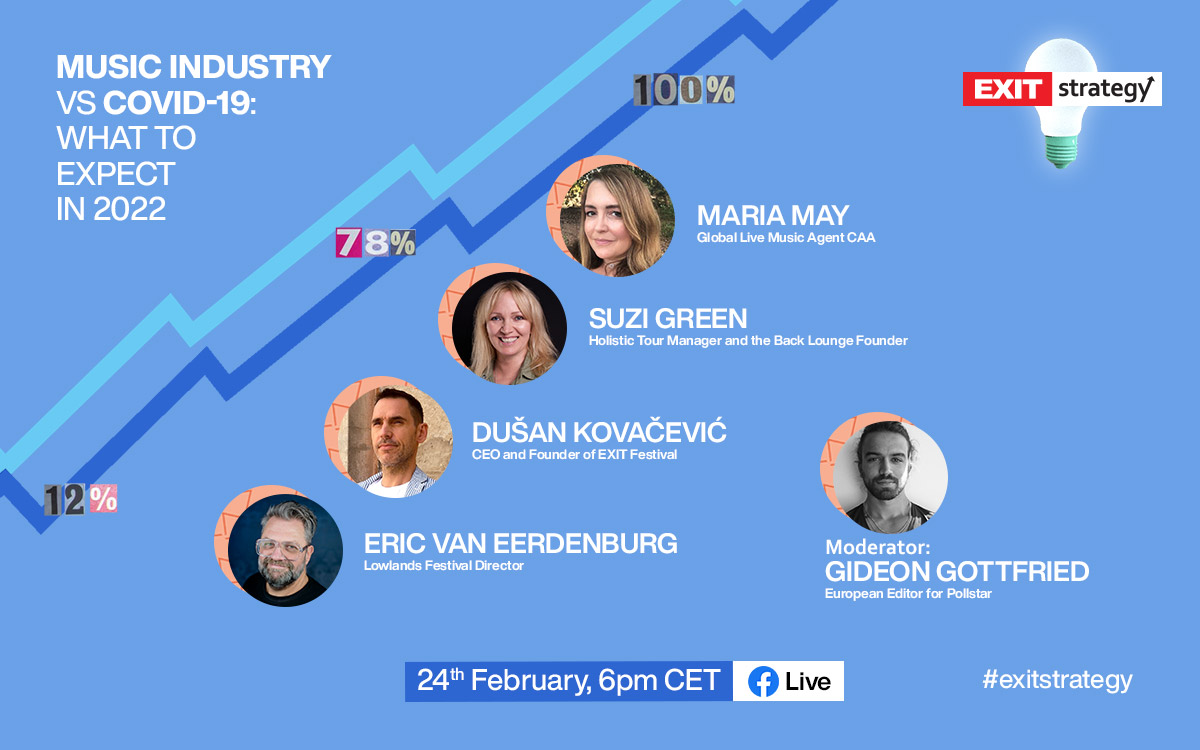 Although almost two years have passed since the outbreak of the pandemic, the music industry is stagnating in many countries worldwide, waiting for the relevant authorities to offer solutions and make decisions regarding future events. The consequences of this situation will be discussed at the panel ”Music Industry vs COVID-19: What to expect in 2022?,” organised by the EXIT festival within the ”EXIT Strategy” conference, featuring key figures from the global music scene.

The speakers include the agent of one of the largest booking agencies in the world, CAA Maria May, the director of the Lowlands festival Eric van Eerdenburg, holistic tour manager Suzi Green and the founder and director of the EXIT festival Dušan Kovačević. The panel will be moderated by Gideon Gottfried, the editor of Pollstar, the world’s leading magazine covering the concert industry. It will take place on Thursday, 24th February at 6 p.m. and streamed on the EXIT Festival Facebook page.

Maria May is an agent employed in the world’s leading agency, CAA (Creative Artists Agency) and represents global superstars such as David Guetta, Black Eyed Peas, Roisin Murphy, Robin Schulz, The Chainsmokers, Nicky Romero, Lee Burridge, Paul Kalkbrenner, and many others. She is on the Advisory Board at AFEM, an organisation representing the interests of those involved in electronic music. She is also engaged in a campaign calling for more support from the British Government for the music industry during the pandemic.

Eric van Eerdenburg is the director of the largest Dutch music festival Lowlands. He is a member of the management team of the concert agency Mojo Concerts, which organises 12 major festivals, more than 200 concerts, and over 2,000 club events every year. He took part in last year’s “Unmute Us” protests, held in cities across the Netherlands, urging the government to allow clubs and festivals to operate, putting a stop to the discrimination between cultural and sports events.

Suzi Green is a holistic tour manager collaborating with artists such as Placebo, Katie Melua, PJ Harvey, The Chemical Brothers. An integral part of her work with musicians is raising awareness of mental and physical health issues of performers and workers in the industry.
Dušan Kovačević heads the largest network of music industry professionals in Southeast Europe, organising nine festivals in seven countries. He is the founder and director of the EXIT festival, many-time winner of the Best European Festival title. He also founded the EXIT Foundation, which addresses relevant social issues.

Gideon Gottfried is the editor of the prestigious Pollstar magazine for Europe and the UK, whose articles have also been published in Billboard, IQ Magazine, and Vice Germany. He is also an activist and the co-founder of Crispy Crust Records.

What can those employed in the concert/music industry do? How can they overcome a situation in which, instead of opening up, countries impose new sanctions and restrictions preventing concerts, festivals, and other events from taking place? How much has the current crisis affected people’s mental health? These and other topics will be discussed by speakers with years of international experience in the music industry.

For the past year and a half, music industry professionals have not sat idly by. Partnering with scientists and health experts, they have researched how to safely organise events during a pandemic. The results of these studies have unequivocally shown that gatherings do not contribute to the spread of the virus when COVID protocols are followed. Government officials even took part in some of these studies, but they refused to acknowledge their results when making decisions.

EXIT 2021 featured controlled visitor entry, with all visitors having to show a negative PCR or rapid antigen test, a certificate of vaccination or a document confirming they had previously overcome COVID-19. During the festival, research was conducted showing that the festival did not contribute to the mass spread of the virus.

Although the situation in many countries looks dire, it can change. This panel will explore how.