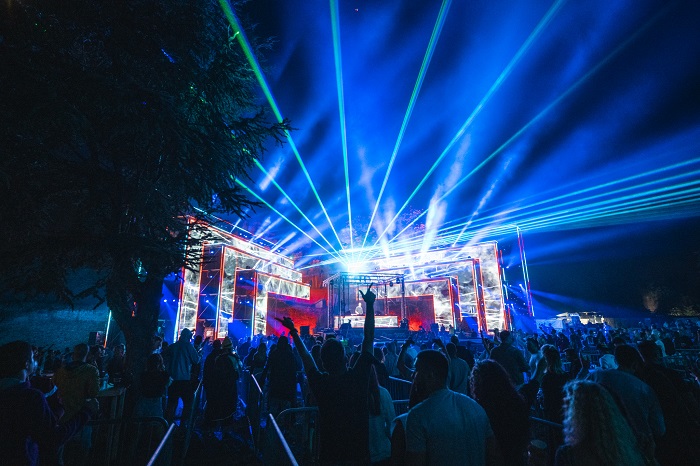 After four fantastic days at the Petrovaradin Fortress, Exit’s Life Stream, a project realized in partnership with the United Nations World Food Programme, the biggest humanitarian organization in the world, is set to appear before a multimillion-strong global audience.

Over two long weekends, from the 17th to the 20th and from the 24th to the 27th of September, exclusive premieres from the world’s leading electronic stage, mts Dance Arena, which had some of the biggest electronic names in the world such as Carl Cox, Charlotte de Witte, Adam Beyer, Ben Klock, Nina Kraviz, Paul van Dyk, Ofenbach, Mahmut Orhan, Satori live, Black Coffee, and many more perform over the last weekend, are coming.

The very first teaser, Charlotte de Witte’s performance which premiered on Saturday, gathered as much as 600,000 views and is expected to pass the number of one million viewers in the following days. This performance resonated strongly in the world’s music industry, both due to one of the most spectacular productions of this year and the fact that while most of the festivals around the world offered their virtual editions, EXIT was among few who were able to organize a real live event.

Thursday, September 17th will present sets from Carl Cox, Ilija Djoković and Lag, while Friday will feature Ofenbach, Burak Yeter and the duo Divolly & Markward. Streams of the performances of Nina Kraviz, Marko Nastić and Space Motion have been prepared for Saturday, September 19th, and the great Black Coffee, Satori live and Coeus will be featured on Sunday.

The second week will start on Thursday, September 24th, with a special surprise set, followed by Marcel Dettmann and Tijana T. On Friday, recordings of performances from Mahmut Orhan, Paul van Dyk, Vantiz and Lady Lee will be streamed, while on Saturday it will be Adam Beyer, Ben Klock and Ece Ekren, featuring our own Milica Majstorović. The final night of Life Stream’s online edition is reserved for exceptional sets from DJ Tennis and Hot Since 82, ending with a special back2back performance by Kristijan Molnar and After Affair. The biggest global festival streaming event will cover two long weekends this September, starting from the middle of the month, with recordings that will air, symbolically, from 20:20. All streams, as well as a detailed streaming schedule will be available at the official website, You Tube channel and EXIT Festival’s Facebook page, as well as at Life Stream’s website. During the online edition, videos and messages which speak about the ecological mission of the project and work of the United Nations World Food Programme will be broadcasted, while numerous cultural and tourist sites from Novi Sad and Serbia will be represented in between the performances. In addition, the public will be invited to donate directly to the United Nations World Food Programme through their official website.

The live edition of Life Stream, where all the performances were recorded, took place from September 3rd to the 6th. With such a demanding task, incomparable to anything so far, EXIT showed how a completely safe event health-wise can be organized for several hundreds of people, following the numbers prescribed by the Government measures. This was also recognized by the authorities who praised the organization of the event, especially from the point of view of adhering to all the measures announced, which were even stricter than those prescribed by the Government.

With this event, Life Stream project, in partnership with the United Nations World Food Programme, entered its new phase. The project, which launched last year and together with Green R:Evolution, represents EXIT’s largest environmental endeavor to date, working with the world’s largest humanitarian organization to expand its reach, highlights the problem of ending extreme hunger for millions around the world, in addition to environmental protection. Given that the pandemic and quarantine measures will bring as many as 270 million people on the verge of extreme hunger before the end of 2020, which is an increase of 80 percent compared to the year before, the consequences will be most severe for those who are already vulnerable.