Outlook for 2022 in the Music Industry: Festival Season and Tours Beyond Doubt

Početna » News » Outlook for 2022 in the Music Industry: Festival Season and Tours Beyond Doubt 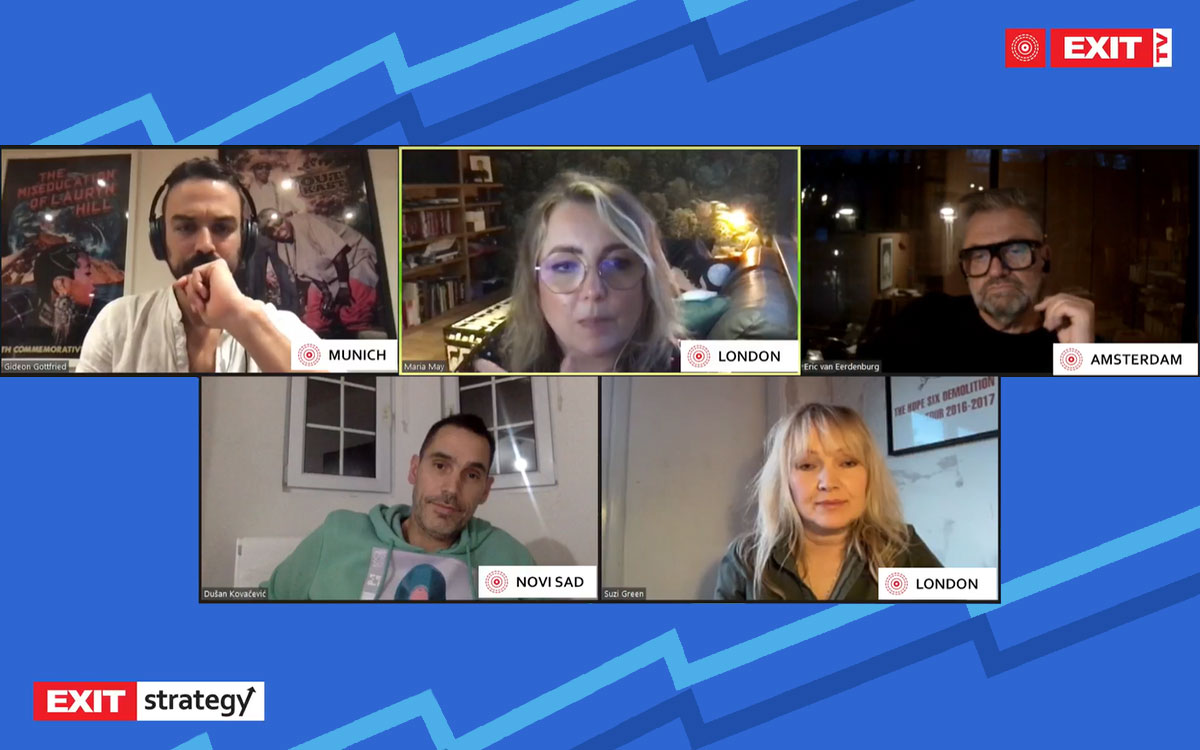 Music festivals and tours will undoubtedly take place this year. That said, cooperation with policymakers and solidarity and unification of the whole industry is necessary to strengthen the event sector further and overcome any potential crisis. These are the conclusions of the panel “Music Industry vs COVID-19: What to Expect in 2022?” organised by the EXIT festival as part of the EXIT Strategy conference.

Four highly prominent people employed in the music and event industry spoke at the panel: an agent for one of the largest booking agencies in the world, CAA, Maria May, founder and director of EXIT Festival, Dušan Kovačević, director of the Lowlands festival, Eric van Eerdenburg, and tour manager, Suzi Green, while the panel was moderated by Gideon Gottfried, the editor of Pollstar, a leading global magazine covering the concert industry.

Although disappointments and event cancellations have become the norm recently, the panel’s speakers expect this spring to bring back the festival season. However, they point out that the event sector must have the understanding and support of authorities, as well as global solidarity among those employed in the industry.

“Compared to the support that other industries have received, music is in a helpless situation. The reality is that we survived solely through information sharing and joining forces. We need to be really holistically sound business that supports its workforce and each other and get the governments to be on board with this“, said May, who represents David Guetta, among others.

She also commented on her relationship with EXIT. “I was truly and utterly honored to be working with EXIT for the last 20 years. Our relationship is a friendship as much as it is a partnership, and it is, first of all, unique. I take friendship very seriously and have high standards. We often talk about what we are building and what legacy we are creating”, she added.

The panellists pointed out inconsistencies in the anti-pandemic measures — many types of gatherings were permitted to take place before musical events, which were the last events to be allowed. Kovačević noted that in 2021, EXIT was the only festival organisation in the world that managed to hold as many as four festivals in three countries, emphasising that education and discussions with policymakers represented the biggest challenges of the entire organisation.

“The global music industry as a whole is stronger than each country in the world individually. This is why its unification is necessary to prevent its complete annihilation during a potential future crisis. We are fighting for more than the right to hold a festival — we’re fighting for the people’s right to gather. Humans cannot survive without mutual contact; it is at our core, and it is crucial for our mental and overall health,” said the director of the EXIT festival.

One of the panel’s key topics was the mental health of both the audience and the performers.

“Presence and togetherness at music events are extremely important. I feel sorry for the young people who lost two years of their youth, not having the chance to experience such gatherings. Many musicians and creative people, in general, have experienced declines in creativity and productivity because of this hiatus”, said Lowlands festival director Eric van Eerdenburg.

Tour manager Suzy Green said that “a sense of community and a feeling that you are part of something greater than yourself” are both vital for those working in the music industry. She also spoke about the mental health challenges faced by music industry professionals.

“During the two-year break, employees in the music industry faced financial problems and anxiety due to the uncertainty caused by constant delays of tours and performances”, Green said.

The panellists agreed that it was necessary to merge all aspects of the music and event industry, reaching an increasingly higher degree of togetherness to ensure the entire industry can avoid a collapse or complete destruction in the future. They pointed out that the authorities must provide help, insurance, and support to festivals, musicians, and the entire music industry, just as they do for any other. They concluded that music must be understood and accepted as a vital part of society and the life of every human being and that, as such, it must be supported in every way.

The panel “Music Industry vs COVID-19: What to Expect in 2022?”, organised by the EXIT Festival, is part of the EXIT Strategy online conference, launched in 2020 under the slogan “We create an exit from the pandemic together.” So far, the panels have gathered some of the leading global and regional experts in tourism, culture, events, media, and other spheres of public life.