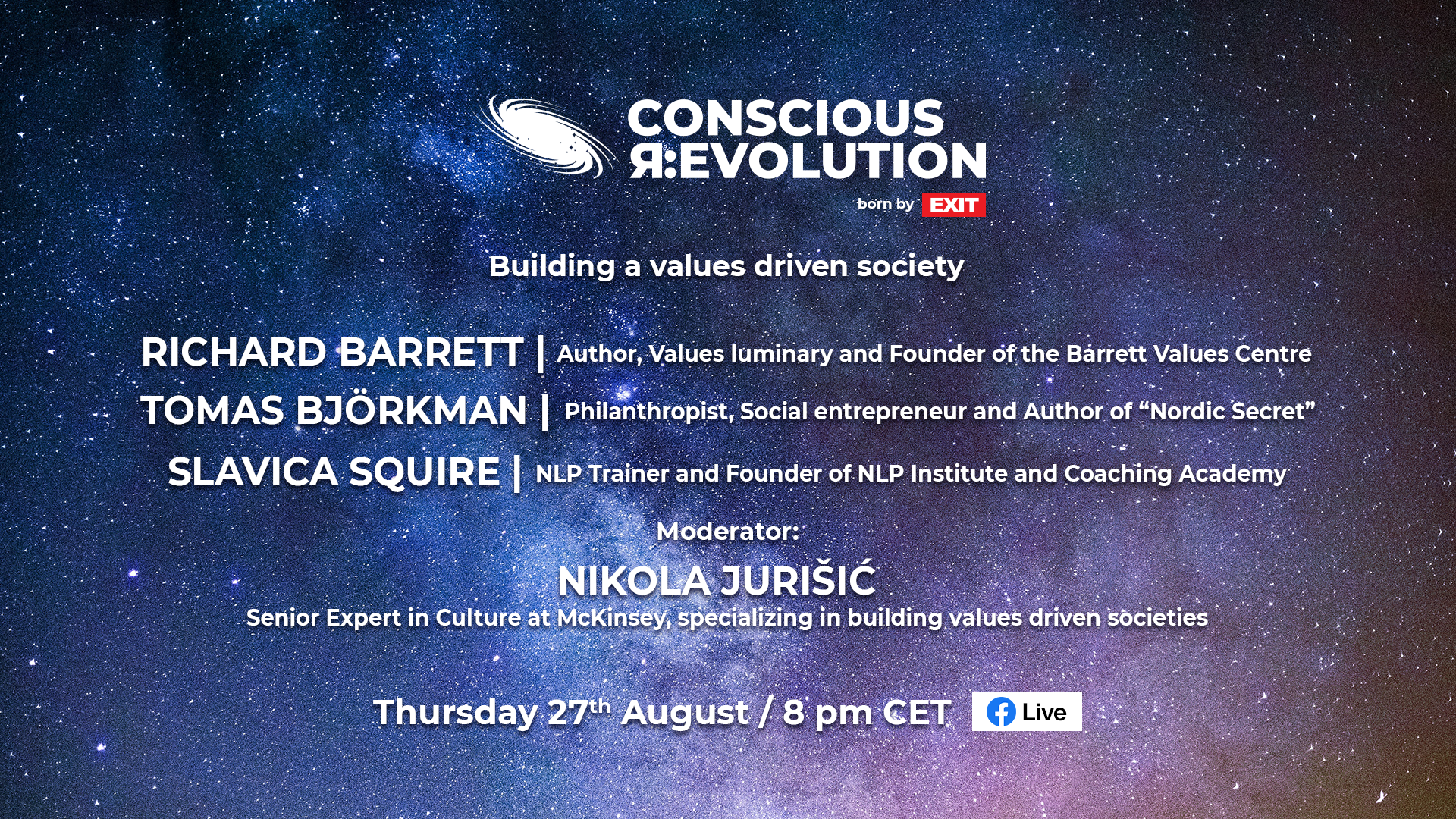 EXIT’s latest panel within the Conscious R:evolution platform, will focus on one of its pillars, the attitude that every positive change in society occurs primarily as a consequence of an individual’s evolution of consciousness. On Thursday, August 27, 2020 at 8PM, the panel will open the topic of building a society based on true values, live on EXIT Festival’s Facebook page.

Through a discussion on the topic of building a value-based society, some of the world’s leading experts on value systems, will answer questions on how individuals, teams, organizations and society, as a whole, can build value systems within which both individuals and society, will be able to reach their full potential.

The participants of the panel are:

Richard Barrett – Author, values luminary and founder of the Barrett Values Centre, the largest global values organization which has assessed the values of over 50 nations, tens of thousands of companies and hundreds of thousand individuals around the world;

Tomas Bjorkman – Philanthropist, social entrepreneur and co-author of “Nordic Secret” – the book that recounts the efforts put in to building values driven societies in the Nordic countries in the 19th and early 20th century history – resulting in their level of development today;

The discussion will be hosted by Nikola Jurišić, a senior expert in culture at McKinsey, who specializes in building value-based systems, with global experience at the level of organizations, states and society.

The panelists will discuss whether the prevailing values of an organization or society dominate its success and productivity, as well as the “secret” of Nordic countries which had, over a short period of time, gone from being the poorest region in Europe to being the most prosperous and richest of its parts. The connection between an empowered individual and democracy, and the influence of negative patterns such as “success is never forgiven”, “the role of the victim – it’s easier to whine than try”, and “the grass is always greener on the other side” on the development of Serbian society and its inhabitants, will also be among the questions discussed by the panelists.

The panel will be broadcast live on August 27, 2020, at 8 PM, or via video on EXIT Festival’s official Facebook page.

Open Call for World Music Performers Within the MOST Project

Mile Kekin and Marko Louis: “Mirna Bačka” Is a Great Show; Watch It and Experience the Charms of the Bač Fortress